On Sept 26, the United States sanctioned the Dandong Hongxiang Industrial Development Company for laundering money for North Korea and aiding North Korea’s nuclear weapons program. The United States also froze the company’s assets, indicted four of its high-level employees, and moved to seize 25 of its bank accounts. This marked the first time that the Obama Administration has sanctioned a Chinese firm for its ties with North Korea. The company’s chairwoman, Ms. Ma Xiaohong, was arrested by Chinese officials and is currently under investigation by the Chinese government.

Prior to the crackdown, the Obama administration had been pressured by lawmakers on the Hill to tighten sanctions and ‘secondary boycott’ of Chinese entities abetting North Korea’s nuclear program. Sen. Cory Gardner (R-CO), in particular cited a report jointly produced by the Asan Institute for Policy Studies and C4ADS for providing the necessary information related to Hongxiang Industrial’s illicit trade with North Korea. During the ‘Subcommittee on East Asia, the Pacific, and International Cybersecurity Policy’ hearing on Sept. 28, Sen. Gardner questioned whether the latest action by the administration would have happened without the work of the Asan Institute and C4ADS.1 The report has also gained traction in South Korea with widespread media coverage. Critics have called on the government to utilize the similar investigative method to uncover more illicit activities between China and North Korea.2 It remains to be seen, however, whether the South Korean government can do anything to address this problem in the existing sanctions regime even if it is able to identify other entities engaged in illicit trade with North Korea.

The first presidential debate between Hillary Clinton and Donald Trump recorded high ratings around the world. South Korea was no exception when Yonhap News TV recorded a rating of 1.41 which is comparable to one of the top 11 Korean dramas according to Nielson Korea.

Media coverage on US presidential candidates

The interest in this year’s election is driven by its implications for South Korea. According to a recent public opinion survey, 91% of Koreans agree that election result will have an impact on South Korea’s economy, trade, and security (2% said it will not).

In terms of preference, South Koreans appear unified in their support for Democratic candidate Hillary Clinton. 82% of South Koreans stated that they would vote for Hillary Clinton while only 3% sided with Donald Trump. When asked to assess Clinton’s prospect as president, 22% answered that she will become a better president than Obama (11% said she will not). On the contrary, only 4% of respondents stated that Trump will be better than Obama. 70% of South Koreans disagreed.

If you could vote in the upcoming US presidential election, who will you vote for?4

If elected, will Hillary Clinton become a better president than Barack Obama? 5

If elected, will Donald Trump become a better president than Barack Obama? 6

In the aftermath of North Korea’s 5th nuclear test, there appears to be growing debate in Washington about the need for direct negotiations with the North. In South Korea, however, recent developments have solicited a different response. Aside from the usual call for engagement, the discussions in Seoul have now broached the issue of bolstering South Korea’s military defense capabilities and harnessing pre-emptive strike capabilities. These include assigning precision-strike capabilities on and around the Korean Peninsula to counter North Korea’s threat7, and developing South Korea’s own nuclear deterrent such as nuclear submarines and missile defense8. In response, Defense Minister Han Min-goo stated on Oct 5, during a parliamentary inspection of the defense ministry, that the government is working to further develop its readiness for pre-emptive strike and strengthen the indigenous missile defense capability also known as the KAMD.9

Corporate governance for Samsung Electronic has emerged in the national debate with Elliott Management demanding Samsung Electronics to simplify its operating structure. The move calls for splitting the holding and operating arms whereby the holding company can then merge with Samsung C&T. Other changes proposed by Elliott also include appointing three independent directors to each split company, paying special dividend worth KRW 30 trillion to shareholders, and seeking a NASDAQ listing.10

Experts say that the proposal will not only increase Samsung’s stock value but also raise Elliott’s influence in the company.11 Elliot is known to have picked up quite a hefty number of Samsung Electronics stocks last June, when the Together Democratic Party (TDP) introduced four bills to revise the business law.12 If the four bills are to pass the 20th National Assembly, Elliott may be able to have a considerable role in appointing independent directors.13

There is a general consensus on the need to reform the chaebol system in Korea. The proposed measures are expected to increase transparency and improve corporate governance in Korea.14 However, there is concern over the increased exposure of domestic firms to speculative funds without any safeguards against hostile takeovers (M&A).15 Samsung Electronics is currently reviewing Elliott’s proposal and is reportedly receptive but the move is likely only if the Intermediate Holding Company Act is passed by the National Assembly.16

Improper Solicitation and Graft Act, also called as the Kim Young-ran Act named after the former head of the Anticorruption and Civil Rights Commission, came into effect on Sept 28. Civil servants, journalists, teachers and school employees are subject to tight restrictions on gifts and payments under the new law. More specifically, the new law bans any payment on meals over KRW 30,000, individual gifts worth over KRW 50,000, or family event (e.g. funeral or weddings) related contribution over KRW 100,000. Chung Yeon-guk, the Blue House spokesman, said “it’s expected to be a turning point for improving corruption perception index, raising national transparency and making the society a more level ground for everyone.”17

According to Gallup Korea, 71% of respondents saw the new law as a positive, 15% saw it as a negative development.18 The number of proponents has increased compared to the last two surveys in March 2015, when the act passed the Assembly and during May 2016, when the legislation was announced.

Proponents expect the new law will eliminate corruption (31%), make the society more transparent, reduce graft (14%), change attitudes of civil servants and environment (9%), as well as reduce bribery (9%). Opponents, however, are concerned about the impact on the overall economy (21%), excessive regulations (15%), efficacy (14%), and stringent standards (12%).

The Park administration will spend KRW 10 trillion during the fourth quarter to stimulate the economy and achieve the intended target on growth (2.8%).21 The ministerial level meeting on the economy pointed to several downward pressure to the economy during the fourth quarter, including the enactment of the new anti-corruption law, delayed discount on tax related to replacements of old diesel-fueled cars, labor strikes, and court receivership of Hanjin Shipping, among others. 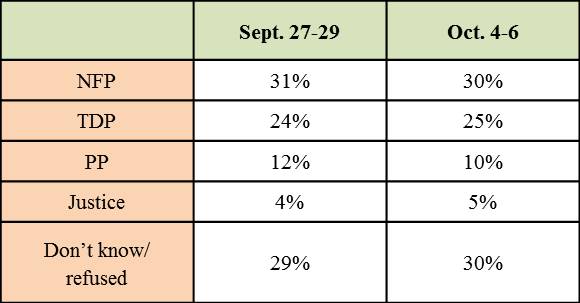