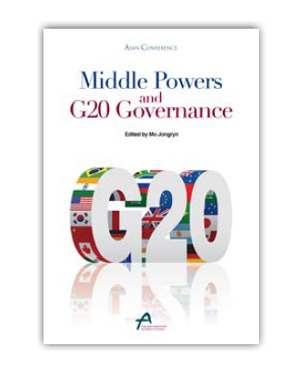 The G20 is evolving into a dynamic institution making complex, yet distinctly valuable, contributions to the burgeoning system of global governance. Two years after the outbreak of the global financial crisis in 2009, the Asan Institute for Policy Studies invited a group of distinguished policymakers and scholars to a conference in Seoul to discuss the politics of the G20. Entitled “Middle Powers and Caucusing in Global Governance: Do Middle Powers Need Their Own Summit?” the conference was an attempt to better understand the internal politics and dynamics of the G20 so as to articulate a path for its future development.

This volume reflects the diverse perspectives presented on each of the major governance groups that contribute directly and indirectly to the G20 political process. It examines how the various groups interact and what the outcomes have been of such interactions. A fresh conceptualization of a G20 system composed of groups of nations that can both balance against, as well as support, one another is presented. Of particular importance is the role of middle-power nations such as South Korea, Canada, and Australia as bridge-builders between the North and the South, the G7/8, and the BRICS.

1.) Richard Gowan, The G8’’s Minor Comeback and the Real Politics of the West

3.) Stephen D. Krasner and Mo Jongryn, Regime Building in the Competitive World Order: The Case of the G20