The U.S. Defense Secretary James Mattis visited Seoul to attend the 49th Security Committee Meeting (SCM) on Oct 28. The meeting resulted in a joint statement that included provisions about the deployment of US strategic assets on the Korean Peninsula and transfer of wartime operational control (OPCON). The two sides agreed to expand the rotational deployment of US strategic assets in the region,[1] but the US did not endorse the proposal for Future Combined Forces Command, as part of OPCON transfer.[2] The defense ministers also made clear that there will be no deployment of US tactical nuclear weapons on the Korean Peninsula.

On Oct 31, South Korea and China agreed to resolve the THAAD standoff. The agreement results from South Korea-China top nuclear envoy meeting between Lee Do-hoon (Special Representative for Korean Peninsula Peace and Security Affairs) and Kong Xuanyou (Special Representative of the Chinese Government on the Korean Peninsula Affairs). In the agreement, South Korea recognized China’s concern regarding THAAD and its position on the THAAD issue, making clear that THAAD deployment does not target a third country and does not pose a threat to China’s strategic security interests.[3] But China reiterated its opposition to THAAD deployment in South Korea and took note of South Korea’s position. Most importantly, China clarified its opposition to the additional deployment of THAAD, the US-ROK-Japan military alliance, and South Korea’s participation in the US Missile Defense system. Interestingly, China’s position reflected Foreign Minister Kang Kyung-wha’s “Three No” principle,[4] released a day before the ROK-PRC agreement was announced. Presidents Moon and Xi are expected to hold the first PRC-ROK summit during the APEC meeting this month.

The opinion about the agreement appears mixed. Some welcomed the agreement as the beginning of improved relations between China and South Korea. Others expressed concerns that China was the major beneficiary. South Korea’s major media outlets pointed out that China did not express any form of regret on THAAD retaliation.[5] It also mentioned that Minister Kang’s remarks on the trilateral military alliance could limit South Korea’s ability to defend itself. Meanwhile, progressive newspapers expressed hope that the agreement could help resolve the North Korean issue.[6]

As the world Bitcoin value continues to surge, the Korean market shows strong interest. 38% of Bitcoin transactions are taking place in Korea, making it one of the most dynamic markets in the world.[10]

Korea’s largest financial firms have also been watching Bitcoin trends very closely. A survey of 20 analytical reports from such firms identified that the key topics of interest include price fluctuation, Chinese cryptocurrency market trends, and analyses of exchange-traded funds (ETF) for Bitcoin in the United States. The reports generally favour cryptocurrency and view them as good investment opportunities.[13]

The South Korean fishing vessel, the “391 Hongjin,” was released on Oct 27 after being held in North Korea for six days. The Korea Central News Agency (KCNA) released a statement that the fishermen (i.e. seven Koreans and three Vietnamese), as well as their boat, will be returned to South Korea after being detained for crossing into the North Korean maritime territory.[14]

The spokesman for the Ministry of Unification expressed relief during a press conference that the crew and ship were allowed to return free of injury. In responding to a question, he stated that the government was aware that the 391 Hongjin had gone missing, it was not aware that it had been seized by North Korea until the KCNA notice. He explained that North Korea did not communicate the ship’s detainment.[15]

Similar incidence occurred in 2009 and 2010 when the ship’s crew was detained for 30 days.

The Bank of Korea (BoK) released the latest Composite Consumer Sentiment Index (CCSI) rating on Oct 27. Geopolitical risks (i.e. North Korean provocations and the “THAAD Retribution”) depressed CCSI for the earlier part of 2017. But this figure has improved during the second half of 2017.[16] 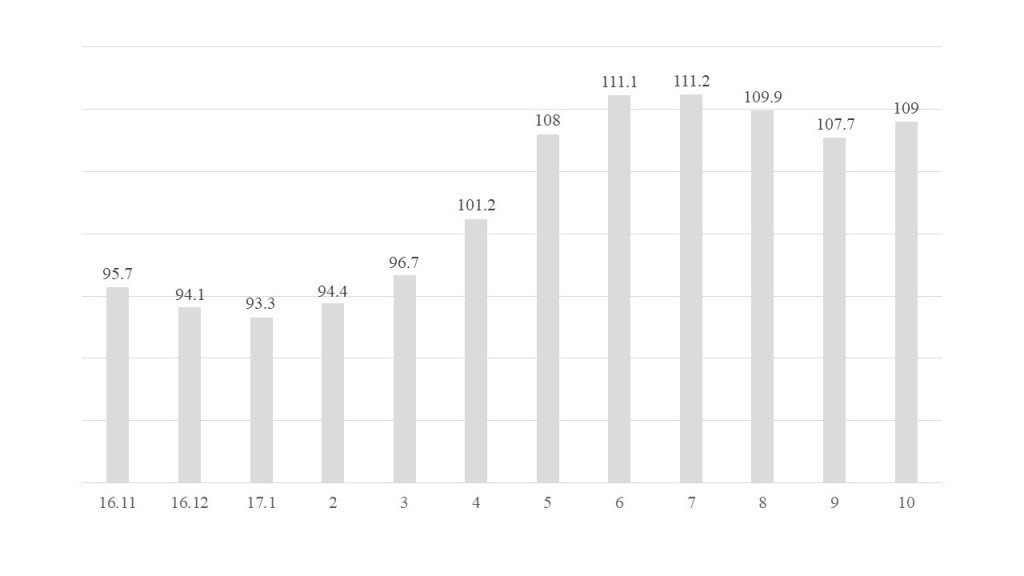 The two contributing factors appear to be the significant rise in economic expectations and confidence about current conditions.[17]

11 Moniker for Korean financial market prosumers in their 20s and 30s.