On Dec 9, the National Assembly voted in favor of President Park’s impeachment (Yay:234; Nay:56; Abs:2; Inv:7).1 President Park apologized on national television for causing “chaos” and agreed to “solemnly accept the voices of the National Assembly and the people.” Finally, she committed to “deal with the Constitutional Court’s decision on impeachment and the special investigation of Choi Soon-sil according to the country’s constitution and laws.”2

Approximately a million South Koreans took to the streets in celebration of President Park’s removal from power the day after the impeachment vote. Unlike the previous six protests, the mood was festive and celebratory. Many still demanded President Park’s immediate resignation and arrest, and promised to continue the vigils until she is removed from office.3

On Dec 5, Park Choong-kun, Lee Yong-bok, Yang Jae-sik, and Lee Kyu-chul were appointed as assistants to special prosecutor (SP) Park Young-soo.4 20 ‘dispatch’ prosecutors were also assigned to assist SP Park. The investigators will look into four major allegations: 1) solicitation of payments from Korean conglomerates (by President Park); 2) Woo Byung-woo, the former senior presidential secretary for civil affairs, failed in his duty and was involved in the corruption; 3) personal relationship between Choi Soon-sil and Kim Ki-choon, the former presidential chief of staff; and 4) Chung Yoo-ra’s preferential treatment in the Ewha Womans University’s admission process5.

President Park may be interrogated by the special investigation unit on more than one occasion although SP Park has stated that he will try his best to minimize that number.8 There is also the possibility that the SP will search the Blue House. Finally, PM Hwang may also be investigated for his role in the investigation of the Sewol ferry disaster in 2014.10

The Ministry of Defense (MOD) announced on Dec 5 that its intranet was compromised and 3,200 computers had been infected by 39 malicious codes. 700 computers were using the MOD intranet while 2,500 computers were using regular Internet servers. Investigators have identified North Korea as the likely culprit given that 20 of 39 codes had been used by North Korea in the past11. Defense Minister Han Min-goo’s computer was also infected although it remains unclear what military intelligence were leaked as a result12.

The National Assembly Inquiry Committee is holding its last hearing on Dec 22. The proceeding has been widely criticized for lack of substance and absence of key witnesses, such as Woo Byungwoo.13 Mr. Woo was summoned for the second hearing on Dec 6 but he was not in attendance.14 Several politicians and individuals donated KRW 18 million (app. USD 15,000) to set a bounty on Mr. Woo and have him summoned to the National Assembly. Since then, a nation-wide manhunt for Mr. Woo have led to a series of information related to his whereabouts. Mr. Woo has expressed his willingness to attend the 5th hearing but the committee has said that there is no official confirmation from Mr. Woo yet.15

Fate of the Federation of Korean Industries (FKI)

With many South Korean businesses alleged to have been involved in the corruption scandal involving Ms. Choi Soon-sil, the fate of the Federation of Korean Industries (FKI) is in jeopardy. The FKI is seen as the principal intermediary between the government and business.16

During the second hearing involving business leaders and economic officials, Vice Chairman of the Samsung Electronics, Lee Jae-yong, stated that Samsung would cease being a member of the FKI.17 Leaders of Hyundai Motors, LG, and SK also announced similar plans.18 Several state-owned entrepreneurs, banks and funds have followed and commercial banks are also reviewing this possibility. Given that four of top five companies contribute more than half of the FKI’s total membership revenue,20 their withdrawal is likely to be a de facto dissolution.

Even those companies opposing the dissolution, including Lotte, Hanhwa and Hanjin, acknowledge the need for some type of reform.21 There is even a thought of turning the organization into a think-tank.22 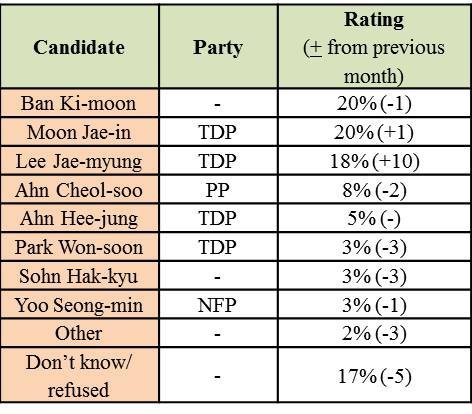