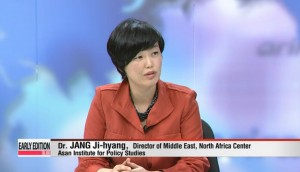 In Depth: Dr. Jang Ji-Hyang, “3 years Since the Start of the Arab Spring”

It’s been three years since the Arab Spring began in the Middle East, which was first sparked when the people of Tunisia demanded President Ben Ali step down and succeeded in removing him from power in January 2011. And three years later, the Middle East and North Africa is still very much unstable.

For an in-depth look at the aftermath of the democracy movement that was sparked in the Middle East, we are now joined by Dr. Jang Ji-Hyang, director of the Middle East and North Africa Center at the Asan Institute for Policy Studies.

Hello, Dr. Jang. Good to have you again with us. 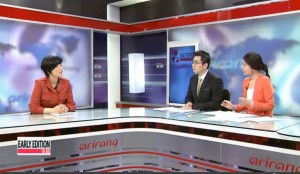 Three years ago, the people of Egypt brought an end to the 30-year dictatorial rule of President Hosni Mubarak by launching massive anti-government demonstrations. The protests were partly sparked by the Jasmine Revolution in neighboring Tunisia.

But Egypt is once again under the rule of the military. What’s your take?

Yes, it’s very unfortunate. Since President Mohamed Morsi of the Muslim Brotherhood was ousted in a coup last year, the country has been severely polarized. Last week, Egypt approved a referendum on a new constitution and the military-backed government and the Army Chief El-Sisi will use the result as a source of their legitimacy. However it was a highly controlled exercise, not really a real choice or consensus-based result.

Sometimes the devil you know is better than the devil you don’t know. Other parts of the region are also having problems, as far as democracy is concerned. What is your assessment? Could this be the end of the Arab Spring?

Probably. Tunisia is the only successful case so far. On the third anniversary of the Arab Spring, Tunisia is the only country celebrating the revolutions which toppled the dictator, Ben Ali. Tunisians are about to approve a new constitution based on more compromises between Islamist parties and secular politicians, which is quite different from Egypt. Egypt and Yemen are typical examples of regression back to authoritarianism. And while Libya is not really showing signs of authoritarian regression, but as we know, there is so much instability due to clashes between the government and militias.

Chaos and confusion remain in much of the region, despite the movements for democracy. What is the main reason for that? And is there any way to add momentum toward democracy?

Toppling a dictatorship doesn’t necessarily guarantee a stable democracy nor does it automatically lead to democratic transition. Revolutions are quite abrupt and contingent phenomenon. Revolutions are much easier to take place than the post-revolution transition process. For instance, in 2011 we witnessed many popular uprisings in many Arab countries, but only four countries managed to topple their dictators and only one has experienced a smoother transition right now.

Turning now to Syria, the country is still torn apart by the on-going civil war between the opposition force and President Bashar al-Assad. And we hear that even international terrorists have joined in the fighting. How do you think the Syrian crisis will unfold? Is there any way to end this conflict?

I don’t expect a bright future in Syria’s conflict resolution despite the peace talks in Geneva right now. Most of all, the two main goals in dealing with the Assad regime and Islamic jihadists are not shared among actors. Unlike the anti-Assad international coalition member countries, Assad’s backers such as Russia, Iran, and China continue to see Assad in power and even among anti-Assad member countries such as Turkey, Qatar, Saudi Arabia, the EU and the US, there is no strong agreement. For instance, Saudi Arabia and other GCC countries do not take a strong and tough stance against Islamic jihadists. Maybe the international community needs to reach a short-term-based and minimalist agreement such as a “nothing but Assad” scenario.

Another country we would like you to comment on is Iran. We are hearing reports that the UN and EU have started to lift sanctions as Tehran has agreed to dissolve its most sensitive nuclear operations. Do you think the Geneva deal will be kept by all parties?

Up to a point. The interim nuclear deal was a really significant first step towards a comprehensive agreement and the newly-elected reformist president, Hassan Rouhani, adopted quite a flexible and pragmatic strategy at the negotiation table, particularly on lifting sanctions. But, again, the deal is quite limited and temporary. Focusing on just dealing with Iran’s current nuclear program, the United States was able to get the initial deal. Also in Iran the president does not have strong power regarding foreign policy making, so the final decision can only be made by Supreme Leader Khamenei.