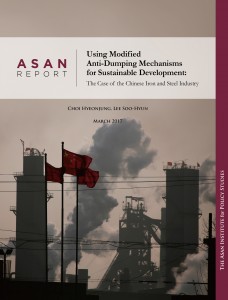 The world’s collective efforts to advance the goals of sustainable development are failing to produce results at the rate that they needed to prevent devastating levels of greenhouse gas emissions. In spite of our declarations of renewed cooperation with the Paris Agreement on Climate Change in December 2015, the countries in line to be the next biggest polluter are becoming more numerous. The current titleholder is China, whose rapid economic growth resulted in a 100-fold increase of total greenhouse gas emissions in just 60 years. The manufacturing of such commodities as iron and steel is regarded as the primary source of emissions, accounting for 47% of the country’s total emissions.

As explored in Chapter 2, the impact of the Chinese iron and steel industry (CISI) on the environment demonstrates that the combination of production overcapacity and high emissions production methods present a serious threat to its own sustainability. Despite efforts by the Chinese government through the 13th Five Year Plan (2016-2020) to put its industries on track with sustainable development, industrialists have found ways to elude regulation and their provincial governments have been willingly ignoring such transgressions in the name of regional prosperity.

The sustainable development challenges of the CISI are not contained within its borders: the industry controls approximately half of the global market for steel products as the lowest-price supplier. As Chapter 3 explores, the firms in this industry eventually became large enough to operate autonomously from the central government, sustaining themselves through assistance from provincial governments and direct trade with foreign markets. Beijing lost control over the CISI during periods of decentralization as provincial governments pursued their own regional growth strategies centered on steel and iron production. The result was unprecedented production overcapacity and deeply embedded structural hurdles to state-led attempts at controlling production and reducing carbon emissions.

This report examines the viability of using external measures to realign the CISI and industries of similar characteristics with sustainability in Chapter 4. While a range of global regulatory instruments are viable candidates for this investigation, anti-dumping is an ideal instrument for this study due to its proven firm-level impacts, the extent of its usage, and its broad applicability through the World Trade Organization (WTO). While anti-dumping measures (ADMs) as an external regulatory mechanism are certain to have an impact on CISI, their conventional application remains insufficient. Thus, the modification proposed in this report targets both material injuries to importing economies’ industries and irresponsible production methods that cut costs by means of egregious environmental degradation. As such, this report provides the basis for a modified approach to ADMs entitled the “tCO2e/t-s Adjusted Dumping Margin” or simply the “Carbon-adjusted Dumping Margin (Carbon-adjusted DM).” The importance of the Carbon-adjusted DM to both China and international society is that it provides a means to apply the Polluter Pays Principle to the CISI, an industry that has been able to gain from freely emitting greenhouse gases into the atmosphere. In the context of the Anthropocene, this paper is one attempt to find a fair price for the products of high emissions manufacturers by more stringently considering their costs in public goods. This paper proposes the Carbon-adjusted DM as a means to charge that fair price.

The search for an agreeable proposal for the creation of a carbon pricing mechanism is building momentum in both research and policy spheres. Emission trading schemes like that in Europe and efforts to create a smart green tax to account for greenhouse gas emissions are attracting attention and being experimented with around the world, including China. Intended nationally determined contributions (INDCs) and nationally appropriate mitigation actions (NAMAs) represent insightful efforts in helping countries find a pathway to sustainable development appropriate to their respective national context. However, sustained change comes from unified, global enterprise. As such, reforming international regulatory systems like ADMs to encourage sustainable development cannot be done solely within borders, but only across them.

Chapter 4 explains the value of implementing a carbon-adjustment to the anti-dumping calculation. Generally, implementation of the Carbon-adjusted DM is significant for three reasons. The first is that the domestic steel industries of CISI product importing markets will not have to find alternative ways to compete, such as closing steel plants and laying off workers. The second is that exporting steel and iron firms will be more compelled to make changes to their production processes that promote sustainability, such as transitioning their technologies to low-emissions output. Lastly, modifications will enhance the accuracy of legal mechanisms as well as better represent existing realities such as global warming. They will also preserve the efficacy and relevance of those mechanisms not only in international trade, but also in global sustainable development. To contribute to these efforts, this report introduces an ambitious yet necessary idea to ongoing research and development in global carbon pricing mechanisms.

The projected impacts of adopting and implementing the Carbon-adjusted DM are further explored in Chapter 5. This research shows that a mechanism of this kind not only makes international regulatory mechanisms in trade more effective, but also strengthens their capacities to contribute to global sustainable development. A businessas-usual scenario is also explored in Chapter 5, which shows that without change, economic conditions for the iron and steel industry, including the CISI, will continue to worsen and world regulatory systems like that of the WTO may suffer from a diminished rule of law.

While this report looked specifically at the case of the Chinese iron and steel industry, the findings in this report present implications beyond this isolated application. Manufacturing industries of advanced economies promoting sustainability and investing in low emissions production are instead being penalized for unfair trade. The immense gap between the amount of steel produced and actually demanded continues to expand, resulting in long-run fears of unloading stockpiled steels at low prices. Sluggish demand for energy efficient and low-emissions production technology encumbers innovation and diffusion. Less developed countries look to emulate the CISI-type production as a panacea to their development challenges. These trends confirm the fact that without change to regulatory institutions, these threats of tomorrow will very soon become the challenges of today.

* The views expressed herein are solely those of the authors and do not reflect those of the Asan Institute for Policy Studies.