Kim Jong-un’s annual New Year’s address stressed North Korea’s resolve to complete its nuclear weapons development.1 The South Korean Ministry of Defense (MOD) announced that it is paying close attention to the North’s activities. Furthermore, the MOD announced that if North Korea conducts an ICBM test, they are likely to use a mobile launcher.2 The MOD also released the 2016 Defense White Papers, which concluded that North Korea possesses 50kg of plutonium — enough to create 10 nuclear warheads.3

– Objective: Establish a foundation that can bring about North Korea’s denuclearization and peaceful unification of the two Koreas.
– Main points of emphasis: 1) implementing a comprehensive approach to convince North Korea to make the right choices and undertake reform; 2) strengthening the current sanctions regime and improving its effectiveness; 3) seeking opportunities to engage in dialogue with the North that can bring about peace and denuclearization on the Korean Peninsula; 4) increasing cooperation and interactions between the two Koreas; 5) healing the wounds of national division and searching for a humanitarian solution; 6) improving the human rights situation of North Korean citizens; 7) implementing a policy to better incorporate North Korean defectors into the Korean society; 8) securing universal understanding of peaceful unification among Koreans through dialogue between the government and the public; 9) increasing education about unification in preparation for the future; and 10) expanding international cooperation to bring about peaceful unification.

Chinese aircrafts have entered KADIZ in the past but this is the first time in a while that a group of aircrafts have done so in such a provocative manner.6 In response, the Korean Air Force immediately dispatched 10 F-15Ks and KF-16s7 while maintaining emergency contact with the Chinese counterpart.8

Government officials and experts in Korea are now trying to figure out the Chinese intention behind the incident. Some have argued that the incident is aimed at the U.S. and Japan for the territorial disputes in the South China Sea9 while others have argued that it was a retaliation and warning aimed at Korea for agreeing to deployment of the THAAD battery,10 the MOD appears to agree more with the latter assessment.11

National Security chief Kim Kwan-jin stated that South Korea and the United States will continue with the THAAD deployment regardless of opposition from Beijing.12

Tension is brewing over the comfort women issue as South Korean activists decided to install a statue of peace in front of the Japanese Consulate in Busan. On Jan 9, Japan’s ambassador and consul-general in Busan were ordered to return home as an expression of opposition. In addition, Tokyo unilaterally halted the ongoing bilateral currency swap negotiation and postponed all executive level economic meeting. With bilateral relationship worsening, the 2015 agreement on comfort women has been elevated as an election year issue. Prominent candidates are suggesting to repeal, renegotiate, and/or review the agreement.13 Foreign Affairs Minister Yoon Byung-se stated on Jan 13, that “the government is not against the statue, but called for collective wisdom on decisions regarding its location.” The problem is complicated by the fact that the government has no jurisdiction over this matter.14

Samsung Electronics Vice Chairman Lee Jae-yong is likely to face charges for bribery, embezzlement, and perjury by the special investigation unit led by Special Prosecutor (SP) Park Young-soo. The SP confirmed that they will charge Lee with bribery of KRW 43 billion.

The SP also confirmed that they have sufficient evidence to prove shared interest between Choi and Park. The South Korean court will decide whether to issue the warrant by Jan 18. If Lee is convicted, President Park will be one step closer to impeachment.15 If Lee is also shown to have used corporate funds to support Choi, he may also be indicted for malpractice or embezzlement.

Samsung denies the charges and argues that the merger was agreed with the understanding that the company should not be pressured by foreign speculators like Elliott Management.16 At the time of the merger, the national sentiment was generally unfavorable against Elliott.17

The SP also confirmed that the Danish authorities will complete their review of Chung Yoo-ra’s extradition by the end of next week.18

In the official plan for 2017, the Financial Services Commission (FSC) Chairman Yim Jong-yong highlighted the importance of expedited and market friendly restructuring.19 Accordingly, the FSC is introducing “the pre-packaged plan,” which mixes the benefits of court receivership and workout thereby allowing the court to restructure the company’s debt while creditors are permitted to provide financial assistance to firms.20 The court receivership makes debt restructuring much faster than workout but freezes the firm’s debts and assets, prohibiting creditors from making additional loans. The court and FSC met on Jan 6 to discuss the details of the new system.21

There are questions, however, about the usefulness of these changes with many observers seeing the relative benefits of improving the “voluntary restructuring negotiation” process instead. Vice PM Yoo Ilho implied that the construction industry is also subject to restructuring in addition to shipping, shipbuilding, steel and petrochemicals.22 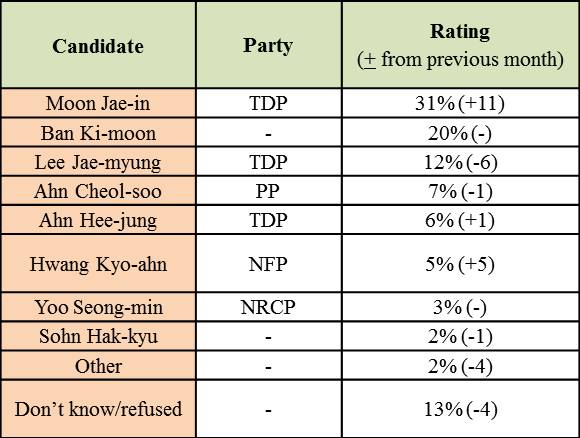 According to Gallup Korea, Moon is the clear front runner for the moment. However, there are a number of factors that could alter this projection, one of which is Ban’s party affiliation. According to a recent public opinion survey, 25.8% of Koreans stated that Ban should not affiliate himself with any of the existing parties while 16% said he should run as a candidate for the NRCP. 10.5% answered that Ban should run under the NFP ticket while 6.3% suggested that he should line up under the PP.33 Another important factor is the possibility of the voting age limit being lowered from 19 to 18. The TDP, NRCP, PP, and the Justice Party have all shown support while the NFP has been hesitant.34 Given the number of high school seniors that participated in the recent candlelight vigils, lowering the age limit could impact the overall turnout and election result.

Will you vote in the upcoming election?35 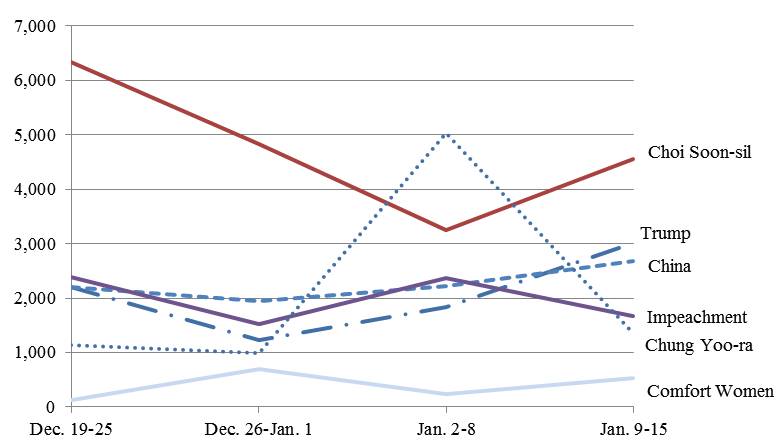