President Park Geun-hye offered her third public apology on Nov 29. Critics point out that her address was carefully worded to avoid responsibility for the current scandal. The apology merely acknowledged her fault for “mismanaging her people.” She also reaffirmed the position that she always placed the country’s and people’s interests above her own. She did, however, agree to resign if the National Assembly can agree on an exit strategy.1

Opposition parties criticized the President for refusing to admit guilt, failing to resign, and passing the buck to the National Assembly. Most importantly, they point out that her speech was a ploy to convince members of the ruling New Frontier Party (NFP) from voting for her impeachment during the general assembly on Dec 2.2 The opposition members insist that they will move ahead with the plan to impeach the President during the next general assembly on Dec 9. Opposition parties have 171 seats in the National Assembly but need 29 votes from the ruling party to impeach President Park.

By unanimous consent, the New Frontier Party (NFP) announced its intent to forego impeachment and push for a resignation in April followed by an election in June.3 However, the anti-Park camp within the party has agreed on Dec 4 to participate in the vote to impeach President Park.4

On Dec 3, an estimated 2,320,000 Koreans took to the streets demanding President Park’s resignation. This shattered the previous record set a week ago when an estimated 1,900,000 people protested. President Park’s third public apology appeared to have backfired with many South Koreans interpreting her statement as a ploy to stay in power. According to a recent public opinion survey by Hankook Research, 70.6% of South Koreans were in favor of either ‘immediate resignation’ or ‘impeachment’ even if President Park agrees to resign by April and names a temporary replacement.5 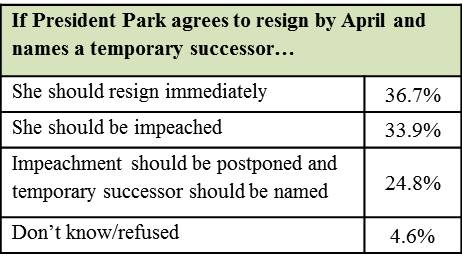 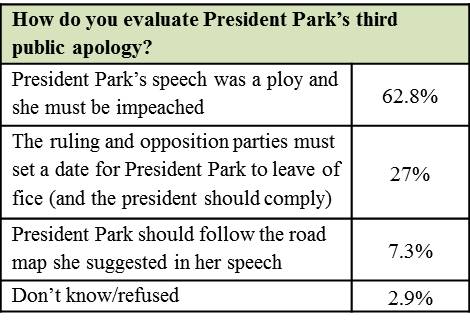 If the National Assembly fails the impeachment vote on Dec 9, the protests may grow larger and fiercer.6–11 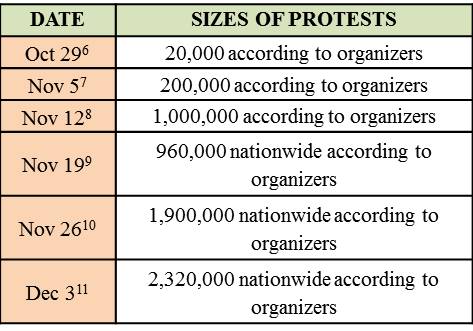 On Dec 2, the opposition parties filed a motion to impeach President Park for “violating the Constitution and the nation’s laws in a broad and serious manner.” Constitutional violations include, but are not limited to, the following:

President Park was also charged with violating the nation’s bribery laws in her involvement with Mir and K-Sports Foundations.

The motion will be briefed during the general assembly on Dec 8 and voted on the following day. Voting is carried out by a secret ballot and will need two-thirds vote for the impeachment process to move ahead.

On Nov 22, President Park approved the special investigation unit tasked for examining the scandal surrounding Choi Soon-sil.12 Park Young-soo was also appointed on Nov 30 to head the unit.13 Special Prosecutor (SP) Park was one of two candidates nominated by the opposition parties.

SP Park has vowed to begin the investigation from scratch and investigate ‘everything’ including the whereabouts of President Park during the Sewol ferry incident, entrance of unauthorized prescription medication into the Blue House, and the possibility of shamanistic influence in state affairs, among others.14

SP Park also downplayed concerns regarding his personal relationship with Woo Byung-woo and Choi Jae-kyung, the former and current Senior Presidential Secretary for Civil Affairs, respectively.15 He stated that everyone will be investigated according to the law.16

President Park has vowed to participate fully in the upcoming investigation.17

If President Park is forced to vacate the Blue House before her term comes to an end, South Korea will have to hold a presidential election within 60 days of her departure. National Assemblyman Kim Moo-sung made headlines by announcing that he will not seek the presidency in the upcoming election.18 Although he commanded only 2% support in the latest Gallup Korea poll, the announcement has surprised many observers given his expressed long-running interest in contending for the Blue House post.

Lee was elevated to the national stage with his opposition to THAAD deployment in his city. He is also a strong critic of President Park, even suggesting that she be indicted for her involvement with Choi.20 He also criticized the most recent public apology as a ploy to buy time21 and accused President Park of having ‘a pro-Japan and dictator DNA’ following the recent GSOMIA announcement.22 Finally, he has filed charges on Nov 22 against President Park for failing to perform her duties during the Sewol ferry incidence.23

The Republic of Korea and Japan signed the General Security of Military Information Agreement (GSOMIA) on Nov 23. Defense Minister Han Min-koo and Japanese Ambassador to South Korea Yasumasa Nagamine signed the controversial bilateral military pact in Seoul.24 The agreement will allow the two countries to share information about North Korea’s missile and nuclear activities without having to go through the United States.

The need for military cooperation between the two countries has been on the rise with increasing number of nuclear and missile tests by North Korea. The decision to sign GSOMIA has been met with criticisms that the government has bypassed public oversight in its unilateral decision to hand over sensitive military information to Japan.25

The agreement will be automatically renewed every year and can only be terminated if one side files for termination 90 days prior to the date of renewal.

Despite President Park’s previous commitment to attend the upcoming ROK-US-Japan trilateral summit meeting in Tokyo, her appearance is not likely given her domestic predicament. If the National Assembly votes to impeach President Park on Dec 9, her authority as president will be suspended immediately. Even if she manages to survive the impeachment process, she will still be facing the possibility of early resignation and, therefore, is unlikely to attend the summit.

The National Assembly Inquiry Committee was formed on Nov 30 to investigate the Choi Scandal. The committee is led by Kim Sung-tae (NFP) and consists of 18 members, 9 from the ruling and opposition parties respectively.

The committee agreed to have four hearings in the next week and a half. One is scheduled for the 6th involving the heads of eight companies – Samsung, Hyundai Motors, LG, Lotte, Hanhwa, Hanjin and CJ. The key question for the committee is whether these companies were coerced by the Blue House to contribute to the Mir and K-Sports Foundations during a meeting with the President last July. Another theory is that these companies saw these contribution as a way to bribe the government.26 Regarding Samsung, there’s additional allegation that the contribution was an exchange for the National Pension Service’s “yes” vote on the merger with Cheil Industries.27

Budget and the Corporate Tax

The government and the National Assembly have reached an agreement on next year’s budget. The biggest conflict was free childcare funding for children aged 3~5. The government set the budget for this item at KRW 500 billion but the opposition parties demanded that they double the amount.28 In the end, the parties agreed to increase funding to KRW 860 billion in exchange for maintaining the current corporate tax but increasing the tax rate by 2% for over KRW 500 million earners.29

Korean conglomerates are thinking about simplifying their structure by creating a holding-company structure. Samsung Electronics has already announced the possibility of this move. SK group and Hyundai Motors are also expected to follow suit.30 Some companies already started this process including Hyundai Heavy Industries, Orion, Maeil Dairy Industry.31

The moves were made amid increasing possibility of TDP-led economic reforms. The alleged corruption surrounding the Mir and K-Sports Foundation has contributed to building this momentum. The TDP identified eight economic bills as part of 23 high priority issues to tackle by the 9th.32 These reforms are intended to significantly reduce large shareholder influence. Under the newly revised Fair Trade Act, for instance, the holding company will not be allowed to offer its own shares to investors in exchange for shares of the operating company, thereby allowing the parent company’s stake in the operating company to grow. The proposed amendment to the Commercial Act also would require Korean companies to separately name board directors and audit committee members and limit major shareholder voting rights to 3% when appointing audit committee members.33